Hong Kong's Financial Secretary Paul Chan Mo-po gave his annual budget address today in the Legislative Council, and the government made a lot of concessions, like tax breaks on the salaries tax, property tax and property rates, low interest loans for businesses, more social assistance for low-income families, and waiving fees for students to take the university entrance exam.

But the top news item was that every permanent resident 18 years and older will receive HK$10,000 (US$1,283). That means some 7.1 million people will benefit. Why so many? Because many permanent residents live overseas... When they will get the money in their hands is another story which worries businesses who are anxious for people to spend the now.

The eight months of anti-government protests and now the spread of the coronavirus in the city has resulted in a lot of empty shops and restaurants.

An acquaintance I had dinner with this evening described her recent visit to the newest shopping mall, K11 Musea in Tsim Sha Tsui. It's an upscale mall that has shops that aren't usually found in most other places (ie more expensive), and there are lots of vertical gardens to create a lush atmosphere, while the staff manning the information booths look like hipsters.

On the day she went, during lunchtime, she could barely count 50 people in the ground floor, and the upper floors? Not a soul.

The only relatively busy area was the food court, and even then it wasn't difficult to get a table.

Part of the problem is that because of the coronavirus, a lot of people are working from home, and the location of the mall is not where many office workers are.

When I asked if some of the shops were closed, she said over 90 percent of them were open. It's a sad -- no -- a disastrous situation for Hong Kong's economy.

The other day a colleague and her husband went to see Guy Ritchie's latest film, The Gentlemen and they had the whole cinema to themselves. Many aren't going because the government has strongly dissuaded people to go to the movies because there is a chance of being infected from droplets in the air, even though people are wearing masks and had their temperature taken at the door.

Meanwhile the fine dining Chinese restaurant in Central we went to this evening just had a handful of tables occupied, customers spread out from each other in the dining room.

It's no wonder the restaurant is anxious to launch its take away lunch boxes, like char siu with vegetables and rice -- something they would have never considered doing before.

But this is the Lion Rock spirit -- finding any way to survive.

A lot of shops and restaurants are going to have to close, and while it's terrible for the people who will be laid off, there is a hope that those companies that do survive will be better -- they will have staff who appreciate their jobs, and are able to serve customers well. 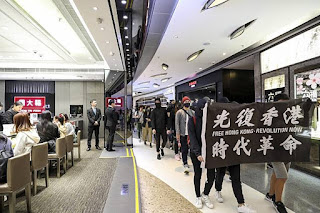 It's the details that count, and people remember that.

Before all this chaos happened, service staff for the most part either didn't care for their jobs, or were too arrogant to serve potential customers. If Hong Kong wants to pull itself out of this economic crisis, it needs people with the right mindset who are willing to persevere -- with a smile.

Here's hoping for a stronger, leaner Hong Kong. Customer service doesn't mean pandering to people, but being professional, enthusiastic and compassionate. Is that too much to ask?

Posted by The Fragrant Harbour at 08:12

The Fragrant Harbour
I left Hong Kong in July 2001 after living here for seven years. And now almost nine years to the day I'm back to record my take on what's happening in the city and the region.